“(I)t is the human populations that are interdependent of the natural world – and not the opposite – and that they must assume the consequences of their actions and omissions with the nature. It is a question of understanding this new sociopolitical reality with the aim of achieving a respectful transformation with the natural world and its environment, as has happened before with civil and political rights…Now is the time to begin taking the first steps to effectively protect the planet and its resources before it is too late…” – Colombia Constitutional Court

Press Statement Contact: Mari Margil mmargil@celdf.org MERCERSBURG, PA, USA: In November, in an extraordinary decision, Colombia’s Constitutional Court declared that the Atrato River basin possesses rights to “protection, conservation, maintenance, and restoration.”  The decision is only now being made public. 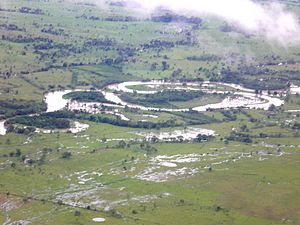 The Court’s ruling comes in a case brought to address the significant degradation of the Atrato River basin from mining, impacting nature and indigenous peoples. Declaring that the river has rights comes after thousands of years of history in which nature has been treated as “property” or “right-less” under the law.  Much like women, indigenous peoples, and slaves have been treated as property under the law, without legal rights, so today do legal systems treat nature.  Under this system, environmental laws regulate human use of nature, resulting in the decline of species and ecosystems worldwide, and the acceleration of climate change. Transforming nature to be considered as rights-bearing – and thus in possession of legally enforceable rights – is part of the growing “Rights of Nature” movement.  The Community Environmental Legal Defense Fund (CELDF) has been at the forefront of this movement, partnering with communities and governments in developing the world’s first Rights of Nature laws.

Hit enter to search or ESC to close